Following the Transportation Research Board’s (TRB) establishment of the Truck Size and Weight Limits Research Plan, two of the topics in the report, pavement and bridge design, were studied by investigator Hani Nassif at the C2SMART laboratory. Nassif developed a procedure to estimate the damage cost of bridges and pavement associated with the overweight trucks for the state of New Jersey.  The team compiled the bridge and pavement maintenance schedule and cost, bridge inspection reports, national bridge inventory, weigh-in-motion data, etc., and then developed bridge and pavement deterioration models for those bridges.

The procedure undertaken by the research team could reasonably be applied to other states in order to reduce damage induced by overweight trucks across the highway network. If sufficient data are given, such as the WIM data, inspection report, national bridge inventory, etc., the damage cost from a national perspective can be derived.

The study on the enforcement of overweight trucks has been undertaken by the research team under the C2SMART project.  Traditionally, overweight trucks are enforced by two distinct methods – at the static weighing stations and by traffic enforcement officers using a portable weigh scale.  However, there are some limitations of these traditional enforcement methods – notably that not all trucks enforced for weight. Especially for the static weighing station, the trucks are only guided to enter the station during specific hours of operation.  The previous study by the research team shows that the overweight trucks are 6.4% of the total truck population, however, the NJDOT report shows that only 0.142% of the total truck population is overweight. The best way to resolve such a large gap is to monitor the truck weight while the vehicle is on move. There are a large number of WIM station across the U.S., but the accuracy of these existing WIM systems are not nearly sufficient to use for the enforcement. Therefore, there is a need to develop an Advanced Weigh-In-Motion (A-WIM) system that is capable of providing the WIM data with high accuracy in real-time.

In this study, the team investigated the effect of overweight trucks on the pavement and bridge damage from a national perspective to develop the most efficient enforcement approach to minimize infrastructure damage.  The enforcement approach will include the continuation of the development of the A-WIM system and expanding its deployment.

The objective of this project is to quantify the infrastructure damage cost for bridges and pavements induced by the overweight trucks from a national perspective.  This proposal also aims to develop an autonomous enforcement approach using the A-WIM system and highly accurate sensors in order to encourage the trucking industry to comply with the present federal weight regulation.

The research team first established a test bed for the development of the advanced WIM (A-WIM) system by collaborating with local transportation agencies for the selection of a location on the Brooklyn-Queens Expressway. Both quartz and piezoelectric sensors were implemented into the testbed. After an evaluation period from a calibration trucks, the A-WIM sensors are currently being used to develop the  system for future autonomous weight screening and enforcement. Click here for more information about the implementation and operation of the C2SMART testbed on the BQE. 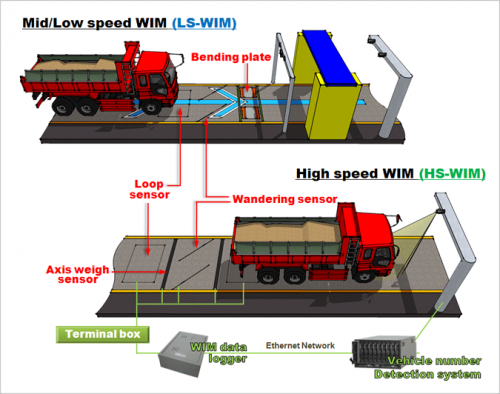 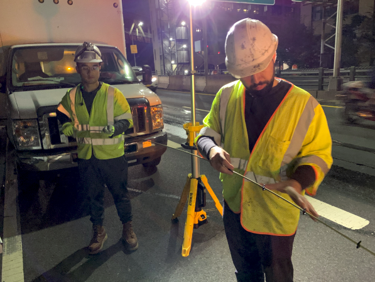