Remnants of Hurricanes Ida and Henri caused torrential rain and flash flooding across New York City this summer, highlighting the city’s urgent need for more resilient infrastructure. Between the two storms, Manhattan weathered the greatest influx of rainfall since 1943, registering 1.94 inches per hour with Henri, and a record-shattering 3.15 inches per hour during Ida. The National Weather Service reported that the 7.13 total inches of rain that fell in New York City on Sept. 1 was the fifth highest daily amount in the city’s history.

But weather events like these are expected to become more frequent as the effects of climate change become more clear. Mayor Bill de Blasio noted that while the city had prepared for the storms in similar ways to its past responses, moving forward there will have to be significant change in how pre-storm preparations are made: “This was not part of any previous playbook, but we’ve got to literally change the whole way of thinking,” he said.

C2SMART’s FloodSense project was launched in 2020, led by Elizabeth Henaff, Tega Brain, Andrea Silverman, and Charlie Mydlarz – and is part of the NYC FloodNet consortium, in partnership with CUNY and the NYC Mayor’s Offices of Climate Resiliency and the Chief Technology Officer (www.floodnet.nyc). The project developed a publicly-accessible platform that provides real-time flood information through revolutionary sensors capable of overcoming common sensor challenges (including durability, connectivity, and power). The sensors are designed to help cities respond to emergencies by providing real-time information on flood depth, frequency, and duration. A data dashboard is currently under development to also allow community members to access flood data and additional data streams, such as rainfall data, 311 flooding complaints, and social media feeds, as well as the digital infrastructure necessary to log, process, and present this data for quick and efficient response.

As the city weathered remnants of Henri, the sensors noted two distinct flood events on the same night, separated by an hour where the water receded: 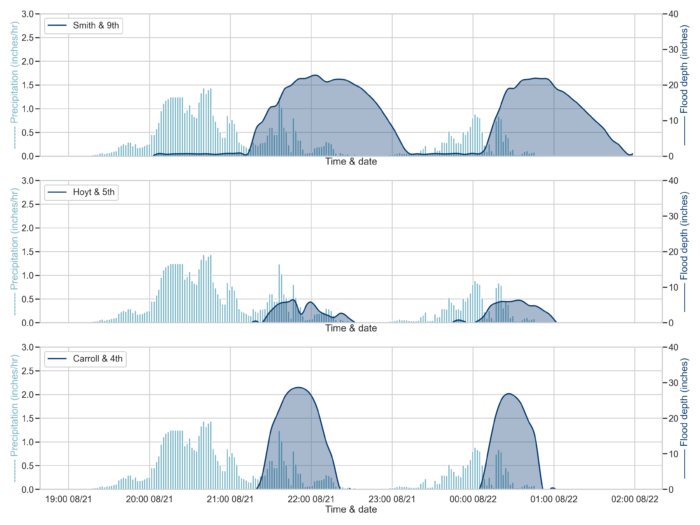 The FloodSense alert system generates emails and telegram messages at the detection of a flood that exceeds 5 inches, and there are early indications that these warnings were received prior to warnings from other city detection systems.

Ida’s impact was even more drastic, developed more quickly, and took a lot longer to disperse: 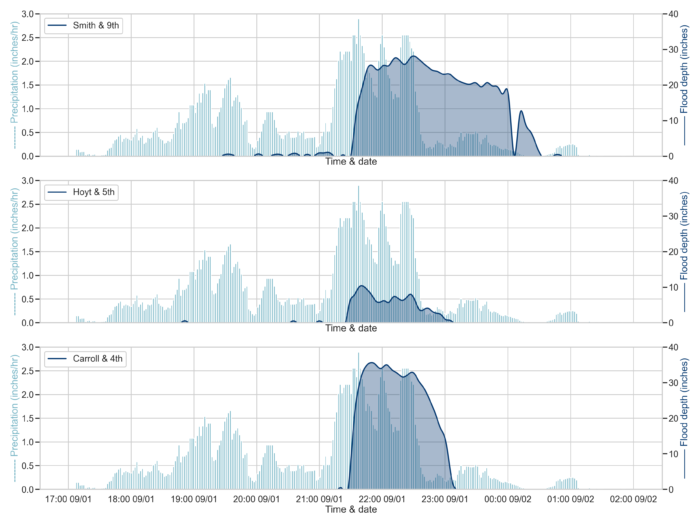